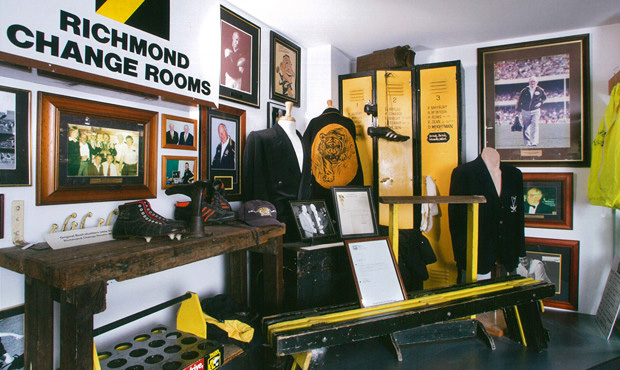 The new RFC Museum opened in 2013 in the Jack Dyer Grandstand following the $20 Million redevelopment of Punt Road Oval.

Supported by a committed group of volunteers, the Museum is open to the public on Mondays from 10am - 3pm. It is also open on days when when Richmond plays its home games at the MCG for 2 hours prior to the start of the game. A small entry fee of $ 5 applies to adults and the Museum is accessed directly from the Punt Road Oval car park.

The Former Players Association were always concerned about preserving the history of the RFC. During the 1970s, the FPOA had discussed with the RFC about an historical area but without success. Whenever renovations were being carried out at the Club, photos and memorabilia were usually thrown into a dumper. Des Martin, the then Former Players President, used to retrieve the goods and take them home for safe keeping. He gathered so much memorabilia over the years that he displayed them in his garage and the place became a de-facto Richmond museum of sorts, which even became open to the public on occasions.

In 1986, Bill Meaklim was appointed as the official RFC Club Historian.

In 1991, after 5 years of collecting information and memorabilia items, an Historical Committee was founded. Inaugural members were Bill Meaklim, Ron Reiffel, Roland Weeks, Jill Morris, Rohan Malley, Paul Hogan and David Norman. Carole Blake (an RFC employee) and Bob Phillips (a board director) also made up the Committee.

In 1996, an area in the mezzanine section of the Social Club was refurbished to create a 250 sqm section dedicated to the storage and display of historical items. Leon Daphne (RFC president) and Jim Malone (CEO) enthusiastically supported the move. An active group, including Ron Reiffel and Tom Allen (FPOA President at the time), fitted out this area and formed the ‘Museum Group’. Ron Reiffel was appointed as Curator and themes were established. In 1997, the RFC Museum was officially opened.

In 2004, the Museum was structured under the governance of the RFC FPOA. The Museum was open every Thursday and, through a team of eager volunteers, often daily. This arrangement continued until 2007 when the Museum had to be closed to make way for a new building. Once the new $20 Million redevelopment of the Punt Rd oval is complete in 2012, the Museum will be re-opened in the Jack Dyer Grandstand.

In 2013, following the new $20 Million redevelopment of the Punt Rd oval (completed in 2012), the Museum re-opened in the Jack Dyer Grandstand.